Every Kid Needs a Little Danger 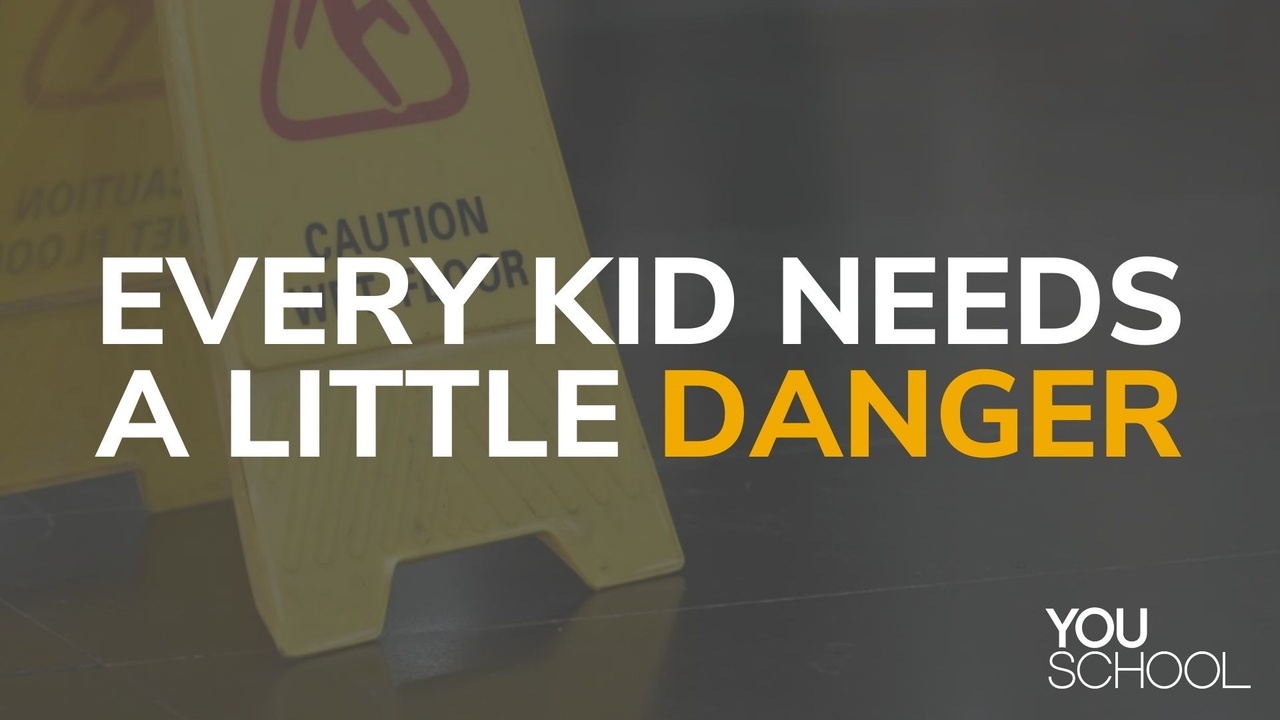 My fifteen-year-old son, Cale, has become a pretty decent surfer since Covid took him off the baseball field. It's been remarkable to see him come alive every chance he gets to jump into the water. Even though he caught a different bug than my lifelong passion (golf), I love watching him dive fearlessly into the water as I watch from the comfort and warmth of the shore.

Recently, weeks before we took a road trip to visit his grandparents, he came to me with huge eyes and a ridiculous idea: surf the break underneath the Golden Gate Bridge. My gut response: are you nuts? Isn't that the great white shark buffet? Isn't the water 50 degrees? Isn't that...dangerous?

He reasoned with me that it's a 'bucket-list' spot that any surfer would love to hit once in their lifetime, and we happened to be staying less than an hour away. Almost regrettably I said, "Sure", knowing that it would at the very least be an early wake-up call that day. At the worst, though, I'd have to call his mom with tragic news and a guilty conscience for the rest of my life for letting him jump into danger.

We hopped into the car before 6 am to try to beat the Bay Area traffic- no luck. The redeeming part of the long drive was watching the sunrise on the bridge between Sausalito and the other side of the Golden Gate. Then, almost Griswoldian in its tragedy (National Lampoon's Vacation, for the uninitiated), when we got to 'the spot' just underneath the bridge, there was NO ONE in the water. None. No one around. Just us and a few seals in the distance. He quickly apologized for wasting our time, and I patiently muttered that at least we got to watch a cool sunrise together. Just a few minutes later, two dudes got out of their van with full artic-wetsuits with hoods and surfboards underneath their arms sauntering towards the water. He looked at me and said two words, "Should I?"

Now, as a dad, I'm aware of my unique parenting role. While voices of caution often scream through my brain and out of my mouth ("Don't forget your helmet!" "Don't microwave that!" "Don't put your finger there!"), I know that a dad's job is to allow my kids to experience a little bit of danger every now and then. I know that it's important to let my kids do things that their mom or grandma would never let them do. I know it's important for them to have opportunities to test their limits, even if it means getting hurt.

I also know that my kids are growing up in a generation that's unique in its safety. Dr. Jean Twenge, SDSU Professor, and renowned researcher on generational trends wrote in her 2017 book, iGen: Why Today's Super-Connected Kids Are Growing Up Less Rebellious, More Tolerant, Less Happy- and Completely Unprepared for Adulthood, "Overall, children are much more carefully protected than they once were...an elementary school in Michigan banned the childhood favorite game of tag, saying it was dangerous. Another school banned cartwheels unless they were supervised by a coach. Many cities have banned street hockey...". Despite public sentiment that we are now living in a much more dangerous world (thanks to the Facebook posts from our neighborhood lookie-loo's), all signs point to a generation being raised with safe playgrounds. That strong swing towards protection from danger is having some unintended consequences already.

Twenge goes on to say, "We protect children from danger, real and imaginary, and are then surprised when they go to college and create safe spaces designed to repel the real world."

Frankly, kids need danger in their lives, at least a little. Not excessively, of course, or reckless. They need to be given multiple opportunities to experience danger, being in over their head, and failing a little.

My son made his way into the frigid water, guided by the two local guys. He was in there for a good 45-minute session, while I watched with my fingers crossed and a prayer on my lips. To get out, he followed the guys around the massive bridge pylon to the west side of the bridge. He was out of my sight for a long while, as visions of him being swept out into the Pacific by strong currents flashed in my mind. But he emerged, high on his courage and bummed he didn't catch better waves. We drove back, with an awesome memory and a shared experience that I only hope will deepen his character, continue to strengthen his confidence, and remind him what he's capable of.

* Here's a photo of the epic surf break a few minutes before giving my son a thumbs-up to jump into danger: 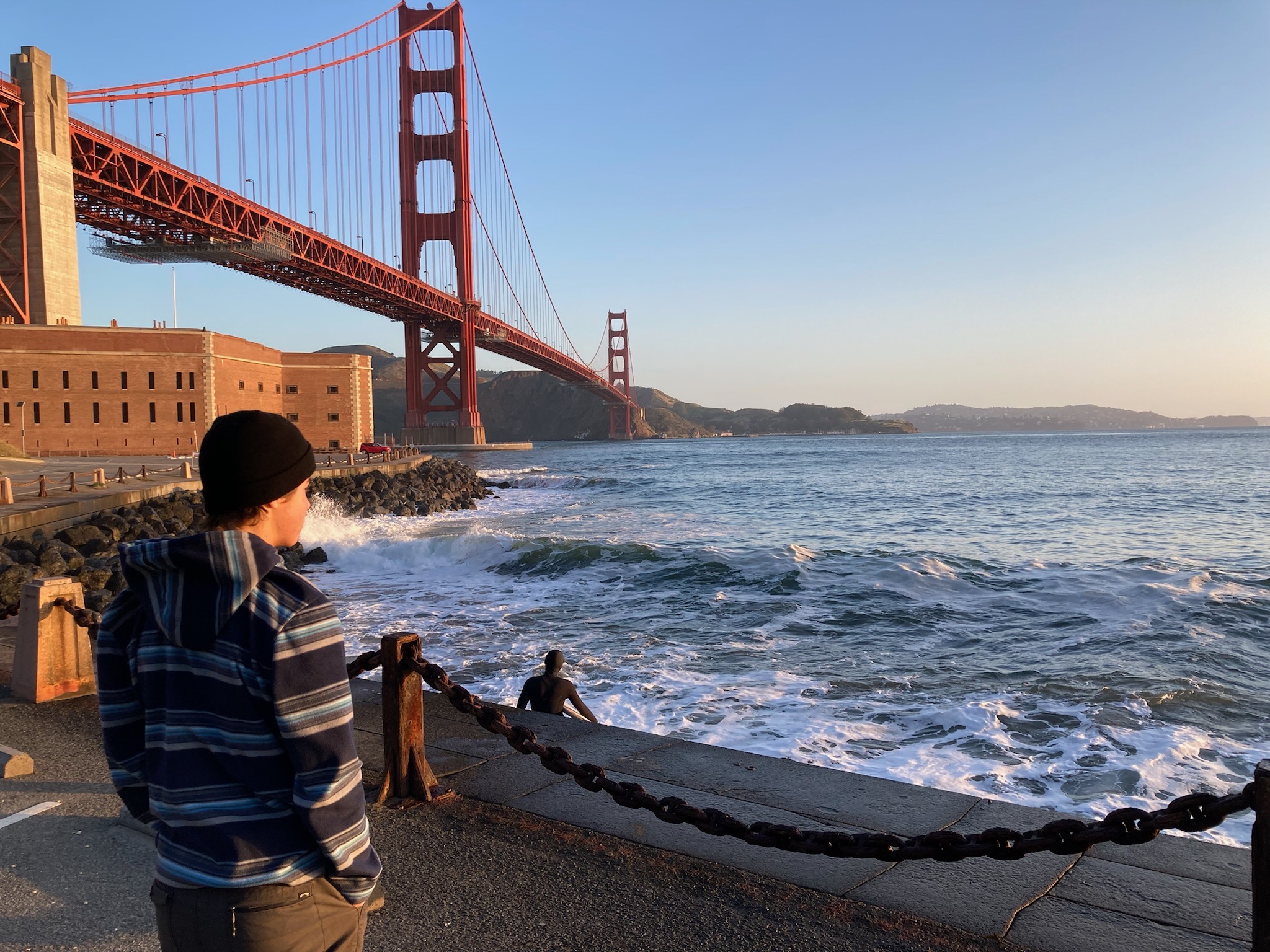 Check out the full podcast episode on failure- why it's so important to give our kids multiple opportunities to "feel, fail, and fall" as author Shefali Tsabury puts it.

Also, if you want to get to know my son better, here's an interview I did with him recently.