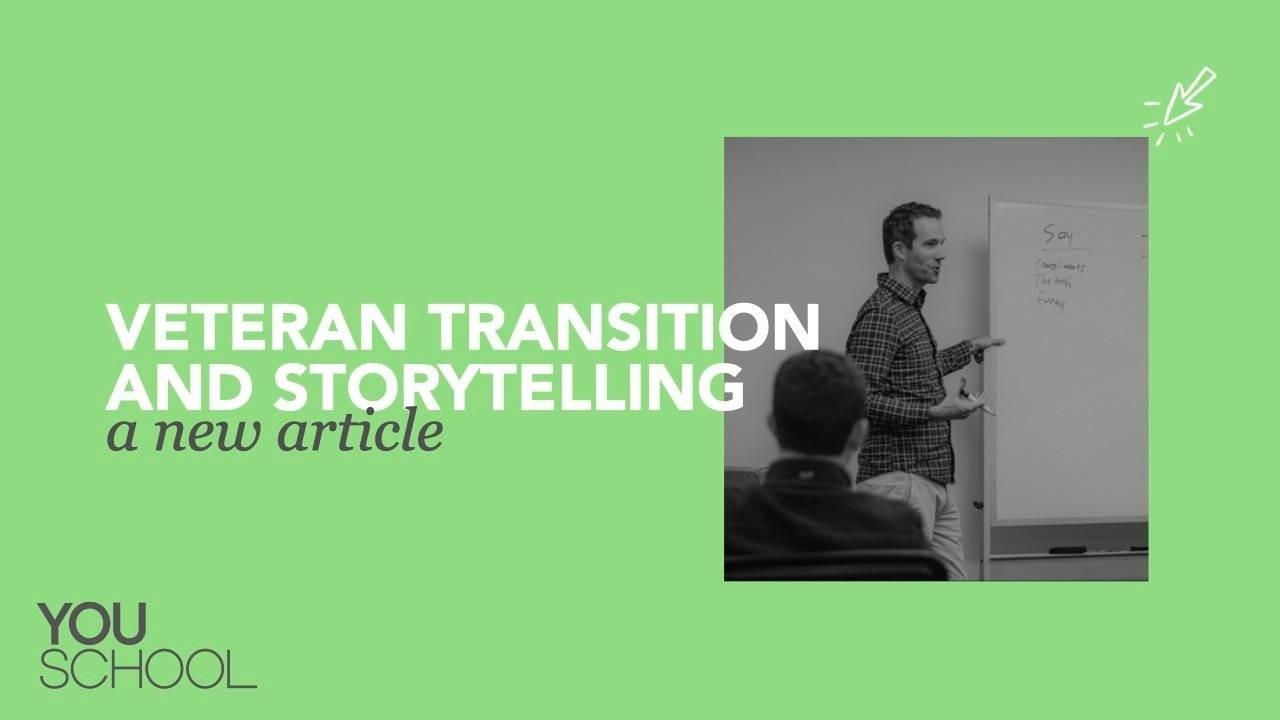 "TELL ME ABOUT YOURSELF..."

Throughout our lives, the most common question we'll be asked is this: Who are you? Rarely will anyone ask the question using those words exactly (except maybe through a peephole?). Rather, people will ask us what we do for a living, they'll ask us where we're from, or they'll ask us what brought us here. But no matter how it's phrased, the underlying intent is the same: I want to understand your story.

Coincidentally, hardly anyone is good at answering that question effectively. Sure, they'll give you some biographical information- I live in such and such place and have this title for that company and have this many kids. But, they won't do the masterful work to tie those bullet points together. They'll leave it up to the listener to try to make meaning from the facts and the figures, from the stops and the detours.

Since 2014 we've been working with transitioning veterans- mostly special forces folks who are making a gigantic transition from serving in the military to the civilian world. While some of them served for a few years and some for longer (up to 30+), their challenges regardless of age or length of service are primarily around storytelling.

First, the story they tell themselves has been primarily an external one. They were told who they were, what was most important, what their role was, what their mission was, and who they belonged to. When your understanding of your life comes from an external source, it's difficult to find your way to seeing themes, patterns, and insights. It's hard to see your own life clearly.

Also, when asked to tell their story- whether to a friend outside the military or in a job interview, the data they have is too wide open for misinterpretation. Especially for the folks who've been special operators (think: Navy SEALs), the broader public has a particular mental framework for who they are and what they've done that may or may not be accurate, but definitely doesn't tell the whole truth. Not only that, but the vocabulary they've become accustomed to doesn't typically translate well to civilians- we don't understand what they mean.

Our work with them, then, is focused exclusively on storytelling. They already have the resources for what we call the simple stuff- like resume writing, building a LinkedIn profile, etc. We concentrate on giving them a framework to examine and discover the story they've been living in through a series of reflection exercises and guided discussions. When they're able to find their own voice and define their life story in their own terms, they're able to see both their past as well as their future much more vividly. They're able to see the arc of where their lives are headed and they feel more empowered to make the right choices for the right reasons.

We give them a new process for telling their story, too. Rather than sharing their resume details, we teach them how to share the overarching narrative thread for how they've uniquely approached their work in the past. Here's what it looks like:

The Problem I'm Uniquely Designed to Solve "Well, you know how most organizations get overwhelmed with the complexity of their operations? They have a bunch of different people doing different roles, and the roles overlap, everyone fights for their own priorities, and then it leads to miscommunication, conflict, and inefficiency?"

The Unique Way I Approach Solving That Problem "Well, I've learned a process that actually works to get different departments filled with different personalities, priorities, and ways of approaching things to come together, create shared operating principles and effectively work together to accomplish a mission."

The Biographical Details to Fill in the Blanks "And I did that for 7 years in the military as a special operator for the Navy SEALs- with three deployments and countless training workups."

The Outcomes of My Work "When we'd be overseas on a deployment, we'd have more than a handful of different entities and agencies working together- from different cultures, different countries, and different languages. When I had the opportunity to lead with my process, within a few weeks we'd be on the same page, working together and successfully collaborating."

Illustrations to Prove the Point "Can I tell you a quick story to illustrate?"

If you were able to follow that fictional setup then you can make the translation to kids just the same. Teenagers have been told what their story is- by their parents, teachers, coaches, and peers. It's come externally. Their story is about their biographical data- where they're from, what sports they've played, and what their academic data says.

But, that's not their real story. They need the same thing special operators need- a process and a guide to examine and discover their story for themselves. They need to learn how to articulate what makes them unique and standout from everyone around them. And when they learn the art of storytelling, not only will they be more effective at telling their story (college admission, job interviews), they'll also be able to write their story, too.